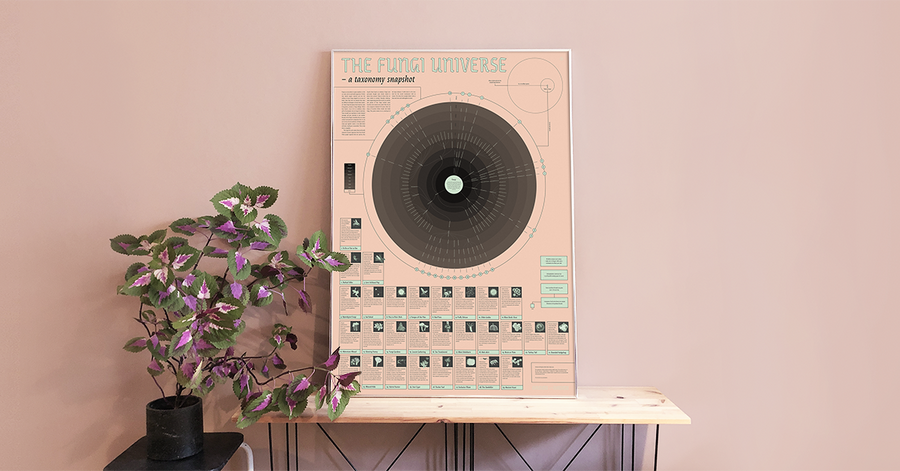 A taxonomy snapshot with examples from major evolutionary branches and extra visual delights. Micro and macro, fungi comes in every form and behaves predatory, truffley or just quite fluffy. 70x100 cm.

What is this exactly?

The Fungi Universe poster visualizes a snapshot of the fungi taxonomy from kingdom to class level. As of now, about 150 000 species of fungi are known to science. However it is believed to be from three to twelve million species out there… or in there (fungi is everywhere!).

Which species do you have?

It was hard to choose, believe you me. Some examples of species who made it to the poster are Termitomyces reticulatus (termite mushroom), Trametes versicolor (turkey tail) and Psilocybe semilanceata (liberty cap, hallucinogenic).

Do you have Le Blob (slemsvampen)?

Physarum polycephalum is not actually classified as a fungus, sorry!

What size is the poster?

To account for every possible location and minimise shipping distances, we use different print shops across the world. Because of this, we use various kinds of paper. If you want to know which paper we will use for your poster, you are welcome to email hej@orderorder.io.

Why did you do this?

Fungi is one of the most fascinating phenomena we know of. You can pick and eat some yourself but the field is much bigger and includes moulds, parasites and compounds within fungi that science has not even begun to understand yet. Basically, we created a reason to go full-on badger in the proverbial garden of fungi. Though, hopefully, the result is better than a badger digging up your garden.